Drayage has the ability to incapacitate any logistics company through unforeseen expenses and delays. Transportation consultant, Tioga Group, estimates that drayage delays incur an unwarranted $348 million to the supply chain every year. This significant amount also includes 15 million hours of lost work time and 9 million gallons of diesel fuel. Since the industry is interconnected, shippers are then directly affected by these unforeseen expenses.

The aforementioned figures are staggering. Weather acts as a catalyst however, and the unplanned expenses could be even higher depending on how unforgiving the winter is. How then did the industry hold up in one of the worst winters ever recorded last year?

Catastrophic Winter of 2013
Snowpocalypse, snowmageddon, snowtastrophy we may call it different names, but we can all agree that the winter of 2013 was one of the worst that Michigan had ever experienced. It was also undeniably a winter full of dread, for it broke records. For example, we endured 94.8 inches of snow, which broke the 133 year old record of 93.1 set in 1880-1881. We also had to endure temperatures that remained below zero for 79 days, which ranks as 3rd most in Michigan history. Another gleeful fact is that during the month of January, Detroit saw a total of 39.1 inches of snow, breaking the previous record of 38.4 inches of snow set in February of 1908.

Drayage During the Winter of 2013
Bad weather invariably affects the transportation industry, and the drayage market found no solace during the 2013 winter season. Although the weather itself was not the root of the problems that occurred, it certainly played an integral role in heightening the key challenges in the industry such as congested terminals, chassis supply, driver recruitment and retention, hours of service restrictions, equipment costs and stagnant rates.

During the sever winter, truck turn times were also slowed at intermodal rail terminals in the Midwest. This aggravated the ongoing issue of shortages that created sluggish operations all the way to East Coast ports. Furthermore, trains were delayed and trucks had more mechanical issues in the cold. Union Pacific Railroad in Chicago for example, reported an average terminal dwell time of 54.4 hours for the first nine weeks of 2014, which made the average dwell time of 34.6 hours in the first quarter of 2013 pale in comparison.

Because of the interconnected nature of the industry, when the intermodal rail terminals face delays then this also impacts the status of chassis. If the freight gets stuck at any point in the supply chain process then that means that the number of available chassis for pickup at ports dwindle significantly. This in turn amplifies equipment imbalances on the East and West coasts.

Just imagine what could happen if delays in the Drayage market did not exist, or if it were at least partially solved. For instance, if turn times in a terminal were cut by just 10 minutes, it would save 4 million driver and tractor hours or $90 million. 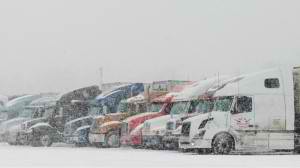 2014 Winter Weather Status
Although we hope that winter this year will be more forgiving, and that what happened last year was a once in a lifetime occurrence, we still cannot overlook the fact that we live in Michigan. According to almanac.com, this winter will still be colder than normal. Furthermore, snowfall is also expected to be above average, with the snowiest periods expected to occur in mid-December, early and mid-January, and early February.

Avoid Costly Drayage Fees
We want to make sure that you are able to avoid unforeseen expenses due to delays in the drayage industry. So make sure that you limit costs by mitigating some of your free time at the source of your containers. This will allow you to minimize storage fees due to the limited amount of free days that are appropriated. So plan accordingly, use your free time wisely, and do not expect the unrelenting winter to be kind to you or the drayage market.