At some point in time, everyone has driven by a semi-truck as they ventured down a highway. These mammoth vehicles have become so ubiquitous that it is sometimes taken for granted, but they have an integral role in the economy. It is estimated that trucks carry up to 70% of all inland freight across America. Freight volumes are also expected to increase by 29% over the next eleven years, which is why the current dilemma of the waning number of truck drivers is alarming. There is an estimated shortage of 35,000 to 40,000 drivers across the country, and experts claim that it will be a long time before that problem is resolved. 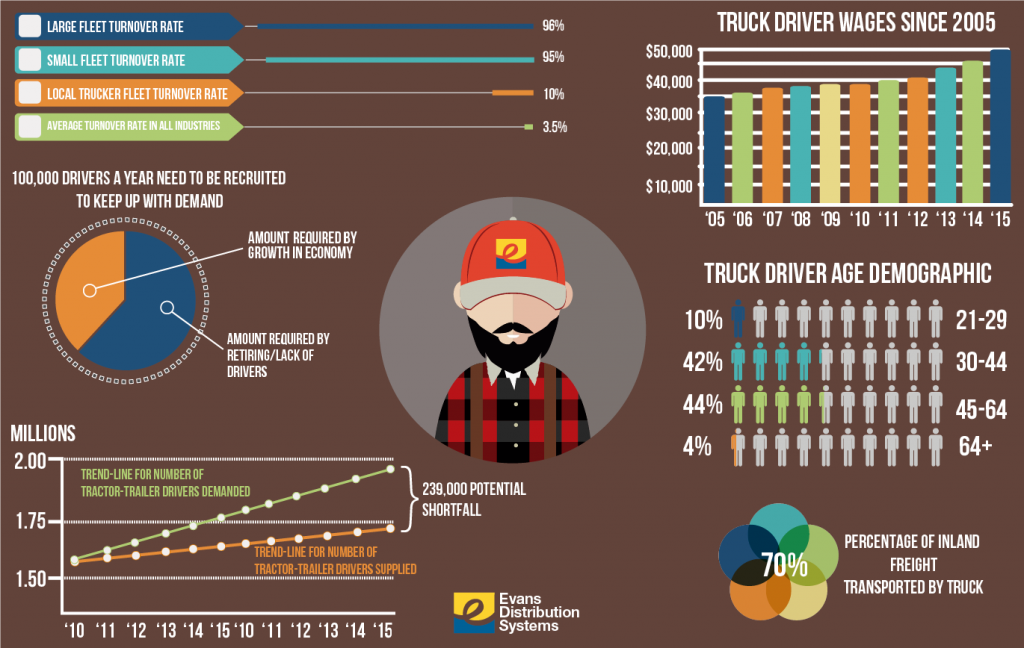 Causes of the Shortage
One of the leading reasons why the shortage is happening is because of the imbalance between the amount of retiring drivers and younger drivers taking up the occupation. It is estimated that 55% of truckers are over the age of 45, while less than 5% are under 25 years old. The disparity between the two age groups goes to show how out of sync the trucking industry is in terms of harboring new talent.

The industry cannot settle with allowing baby boomers to go without proper replacements. Although much is being done to obtain new drivers, the current situation begs to ask the question, “Why are younger generations veering away from the truck driver industry?” Perhaps the easiest answer would be that it is just not glamorous enough for them. Living in a society that embraces entrepreneurship and ingenuity further dampens the image that truck drivers have with the younger generation. Furthermore, the long hours and extended periods of time away from home act as deterrents.

Government regulations also act as roadblocks to the younger drivers. Currently, drivers who are 18, 19, or 20 can only drive within their state. Federal law prohibits crossing state lines unless they are at least 21.

Addressing the Driver Shortage
Trucking companies, however, have been striving to find a solution to the problem by applying stopgap measures. Increasing pay and offering better bonuses have been the most widely used countermeasures, with the average truck driver salary increasing to $50,000 a year, rising from the 2012 average of $40,360. Some companies even offer to cover the training fees, which could amount to $5,000 per driver. Others opt to acquire newer, more comfortable tractors or offer leasing plans that allow new drivers to own their own equipment in as little as four years.

Even the issue of stagnancy in advancement is addressed, as some firms fill management positions from truck driver positions. Additionally, larger truck companies are building rail yards across the country in order to shorten the amount of time that drivers are away from home.

Immediate Effects of the Shortage
Due to the limited amount of drivers available, and companies constantly increasing salaries or improving pay packages, the turnover rate in the industry is at an all time high. Smaller truckload fleets had an estimated 95% turnover rate, which increased from 90% in the last quarter of 2014. These companies though have limited resources, thus they are more susceptible to the shortage. It is estimated that over 390 companies with an average of 27 vehicles declared bankruptcy in the first quarter of 2014.

Although smaller fleets were hardest hit, large truckload fleets were not immune to the dilemma as they still suffered an average turnover rate of 96%.

Local truckers’ turnover rate, on the other hand, remained at 10%. However, it is still a large number compared to the average turnover rate in other industries, which is at 3.5%.

No Clear Solution in Sight
Experts predict with the current growth of the economy and increased freight shipments, over 100,000 drivers a year will need to be recruited in order to keep up with the demand. It is important to note though, that only a third of that number is spurred by new businesses. The other two-thirds comes from drivers retiring and not being able to replace them. If the trend of smaller companies shutting down continues, then shipping rates will inevitably increase. This could massively impact the consumer, as the prices of goods will also have to increase in order to compensate for pricier logistics costs. Although fully automated trucks may be a viable option in the future, it is still in an infancy stage and years away from being roadworthy. If this driver shortage is not sorted out in the coming years, the consequences could be costly for everyone.