Department of Defense Spending on Logistics

President Donald Trump has already caused a stir during his first month in office, with controversial executive orders affecting healthcare, trade and immigration. But what does the head of state and his new government have planned for the defense budget?

The spending for the current financial year was set by previous President Barack Obama. Last year Obama confirmed that the DoD would have a budget of $523.9 billion, an increase of $2.2 billion from 2016.

Of this amount, the transportation budget – which funds the movement of military material between contractors’ plants, military logistics centers and field activities both within the continental US and outside the US – is estimated to take up $1.047 billion. This year, the US is also set to spend $1.194 billion on logistics operations, which includes technical support activities, depot maintenance and facilities sustainment, restoration and modernization.

Both transportation and logistics spending in 2017 is a slight decrease from 2016. 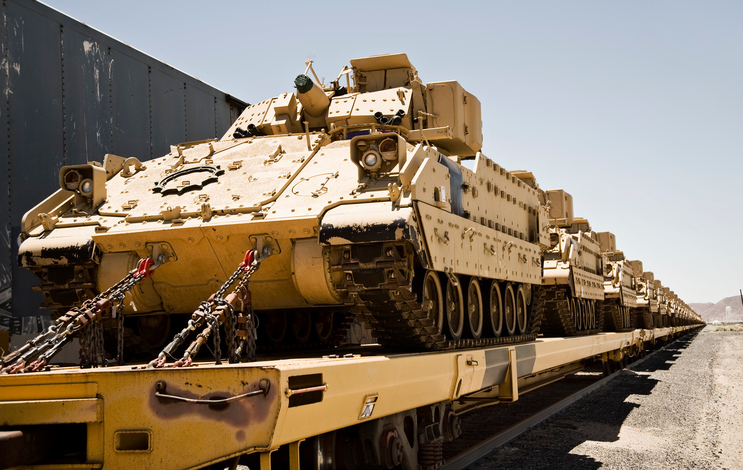 How is the new administration planning to change things?

Trump is set to reveal his first federal budget in the coming months, with a general promise to cut down on the ‘waste’ of the Obama era. But will this include military spending? It’s unlikely, given the President’s vow to crush Islamic State.

Trump’s first Pentagon funding request has to be completed by April and once this has been submitted we’ll have a better idea of the President’s plans. The rumors are that he will seek to increase the number of Army and Navy personnel, build more ships and planes and also ramp up the US’ nuclear program.[http://www.militarytimes.com/articles/donald-trump-military-budget]

This increased commitment to defense could cost an additional $150 billion over the next four years, a significant budgetary increase which some experts think could ‘break’ the federal budget. [http://foreignpolicy.com/2016/11/17/military-experts-trump-defense-spending-plans-would-break-the-budget/]

Others are predicting a doubling of the budget to an eye-watering $1 trillion [https://www.forbes.com/sites/charlestiefer/2016/11/09/president-trump-is-likely-to-boost-u-s-military-spending-by-500-billion-to-1-trillion/#2d437ff46024], although such drastic plans are likely to be opposed in Congress, possibly by members of Trump’s own party.

Whatever happens over the next four years, DoD spending is likely to increase, which can only be good news for the logistics and transportation sectors.

How to Read the Hazardous Materials Table

Top 10 Hazards in a Warehouse

The Benefits of Using a Fulfillment Center’s Small Parcel Account

How to Promote from Within: Megan Holmstedt