Diesel Power: The Impact of Diesel on the Trucking Industry

There is one current trend that makes it seem like the holidays are still not over, and that is the decrease of fuel prices. If the report made by the Energy Information Association (EIA) is true, you can expect the average fuel price of 2015 to be significantly lower than previous years. This is a development that will have a major impact on the trucking industry as diesel prices are also expected to be lower this year.

The increase of a price per barrel over the last ten years also invariably affected the price of gasoline and diesel. In 2004, diesel was around $1.80 per gallon, but that price kept increasing until it finally climaxed. The price per gallon reached a highpoint in 2012 when it cost drivers more than double the 2004 rate at about $3.97 a gallon.

The Effects of High Diesel Costs

It is known that the trucking industry is vital for both commerce and business. In fact, over 80% of US cities receive their goods exclusively by truck. With this massive demand, the trucking industry is also expected to consume a substantial amount of fuel. On average, it is estimated that motor carriers consume over 38 billion gallons of diesel fuel in order to move over 10 billion tons of freight annually.  Diesel is also the highest expense of a trucking company second to labor costs, and it has the potential to take up to 25% of the total operating costs.

The cost of diesel has been rising. With every increment, drivers and businesses are pushed further into a loss. For example, a driver who suddenly has to spend $64,000 a year on fuel, after spending $48,000 to $50,000 in the previous years will incur significant losses. However, in order to combat that loss, the driver will just simply pass that increase along to their customers through a fuel surcharge. This increase triggers a trickle down effect that can be seen in the picture below, which was taken from January of 2010-January of 2011. 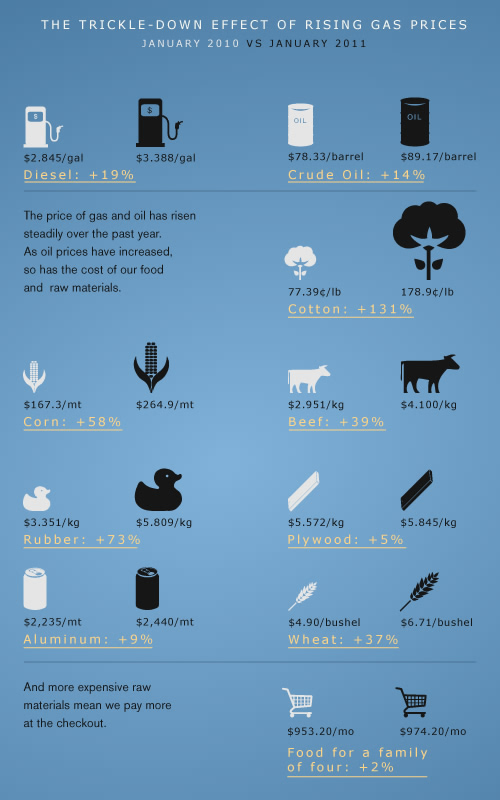 Ever since the summer of 2014, there has been a steady decline in the price of fuel. The good news is that the expected average cost for 2015 is projected to be lower than the previous years. Although the price of diesel is not decreasing as fast as the price of gasoline, it still has the potential to have positive effects on both carriers and customers alike.

In conclusion, a decrease of diesel prices has the potential to revitalize the waning trucking industry. Smaller operations are less susceptible to financial hardship because fuel prices. This will allow for a competitive trucking market to resurface, which equates to competitive rates.

How to Read the Hazardous Materials Table

Top 10 Hazards in a Warehouse

The Benefits of Using a Fulfillment Center’s Small Parcel Account

How to Promote from Within: Megan Holmstedt