The Panama Canal was originally constructed as a way to increase maritime trade in the Americas, and it is the largest American engineering feat undertaken in history. It was completed in 1914, after the United States spent close to $375,000,000 to finish it – which equates to over $8.5 billion today. The waterway stretches for 48 miles and connects the Atlantic and Pacific Oceans. And now, over a century after its original completion, the Panama Canal has once again been expanded.

Why the need for expansion?

The Panama Canal has hugely exceeded the original expectations for the amount of trade vessels that would cross it. In 1934, experts estimated that the canal could accommodate a maximum capacity of about 80 million tons each year. But in reality, there has been much more vessel traffic than anyone ever envisioned: in 2009 alone, the traffic in the canal reached a whopping 299.1 million tons of shipping materials.

The Panama Canal expansion was designed to double the shipping capacity of the canal. This will directly impact international maritime trade as well as economies of scale. It will also help the canal maintain a competitive edge as a maritime trade route through the Americas.

What does the new expansion entail?

The Panama expansion will increase the number of vessel types able to move freely through the canal, because the maximum capacity has grown from 5,000 TEU (a capacity measure that equals 20 feet) to 13,000/14,000 TEU, allowing Post-Panamax vessels to transit through. All of this is made possible due to several components that make up the expansion program:

• New locks. Two new lock complexes have been constructed as add-ons to the first two sets of locks, thus opening up a third lane of traffic.
• Pacific Access Channel, or PAC4. This 6.1 km long channel was excavated in order to allow the new locks on the Pacific side to bypass the Miraflores Lake.
• Navigational dredging. There are multiple navigational channels across the length of the waterway that have now been dredged.
• Raising the lake. The maximum operational level of the Gatun Lake has now been raised by 45 cm, which will improve the draft and water supply of the canal. 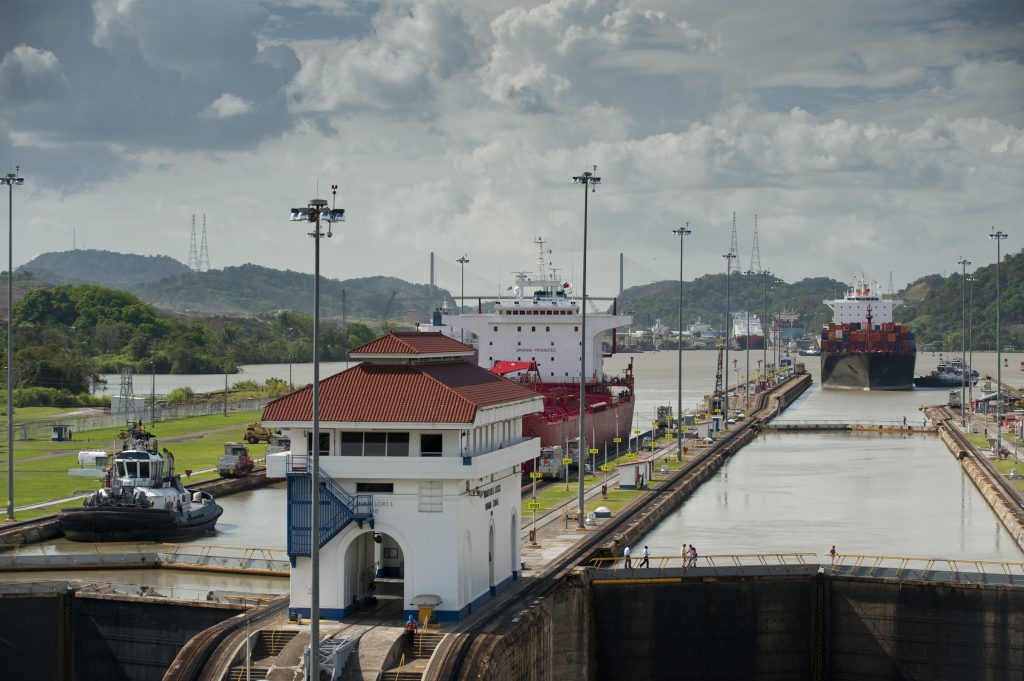 When was expansion completed?

This very recent expansion project was finally completed in the spring of this year, making it two years behind the goal date, which was the centennial anniversary of the original 1914 opening of the canal. Since its completion, the new waterways were officially opened on Sunday, June 26, 2016. The Cosco Shipping Panama christened the new locks by making the first commercial passage on that day, holding a massive capacity of 9,443 TEU.

How will the expansion affect logistics and shipping?

First, according to the predictions of a number of consultants and industrial real estate experts and developers, Asia will shift its focus from ports on the west coast to those on the east and gulf. They say that the expansion of the canal will accelerate a gradual change in the way American containerized imports are handled as they are shipped from Asia. While these types of shipments are mostly sent to west coast ports, the canal expansion makes it easier for them to move all the way to the east coast instead. Taking action to anticipate this surge in trans-Pacific shipments, these eastern ports have spent over $150 billion to make changes like deepening harbors, expanding terminals and improving roadways that make connections at their docks.

Next, the Suez Canal is reacting to the expansion. Since the Panama Canal is now becoming more competitive, Suez officials are attempting to counter this competition increase by offering larger rebates to ships that now use the Cape of Good Hope to get around Suez Canal tolls.

Lastly, global trade patterns are shifting, which could create repercussions for the canal, both advantageous and potentially problematic. In markets across Latin America, projected growth could diminish use of the canal, especially with competing trade routes and West Coast gateways like the new land bridges created by Prince Rupert, Manzanillo and Lázaro Cárdenas. This concept is magnified when you consider the idea that many Latin American businesses are considering the opportunity to move their production from China to places like Mexico. However, growth in the American Midwest could actually increase the demand for shipments going to Gulf coast ports. Experts say that the Panama Canal expansion may give shippers an opportunity to utilize the middle part of the United States in a new and better way, thanks to the railways and highways that are connected to the ports.

Ultimately, the completion of the Panama Canal Expansion is still very fresh, so it is only a matter of time before we see exactly what happens to trade routes and other logistical and shipping matters, and how the expansion will affect trends and patterns across world markets.