The rebirth of the ‘Motor City’?

‘Make America Great Again’ was Donald Trump’s election slogan, and nowhere in the United States did that phrase ring truer than in the city of Detroit. Made prosperous in the 1920s by the country’s world-leading automobile industry, ‘Motor City’ suffered greatly in the aftermath of the global financial crash, with the city filing for Chapter 9 bankruptcy in July 2013.

Almost four years in, it appears the city has recovered, with increased development and certain industries booming. Slowly, but surely, Detroit, the city whose population had fallen to 1910 levels due to the lack of opportunities, is starting to fight back.

As the base for America’s “big three” automakers, General Motors, Ford Motor Company, and Chrysler, the financial crash and the resultant slump in auto sales hit Detroit hard. But the city and its wider environs has recovered in recent years, with Michigan still the top state for North American vehicle production. $2.4 billion was invested in the industry between 2013 and 2015 and, although the industry is still struggling to recover pre-crash employment levels due, in large part, to automation, highly skilled workers are in demand.

Build it and they will come

Auto-manufacturing is not Detroit’s sole industry: the construction sector has experienced high levels of growth in recent years, contributing to around 10,000 jobs per year from the end of 2014 through 2017. This is markedly up from the 3,000 a year from 2010 to 2012. New developments in the heart of Detroit, such as Woodward, have attracted small businesses and generated further growth, so who knows what the next few years may hold?

Unlike US cities of a similar size, such as Washington, Boston and Las Vegas, Detroit has long suffered from a lack of real landmarks and tourist attractions. However, the tourism industry now contributes to around 9% of the city’s employment, with 15.9 million visitors spending $4.8 billion every year. This has partly been fueled by the growth of casino resort hotels in the city.

Detroit is still recovering from the catastrophic collapse of the global economy nearly a decade ago, but the signs of growth identified above are promising. It remains to be seen what impact Trump’s ‘America-first’ trading policies will have on the city and its industries, but we’ll watch on with interest and hopefully see this American giant rise again. 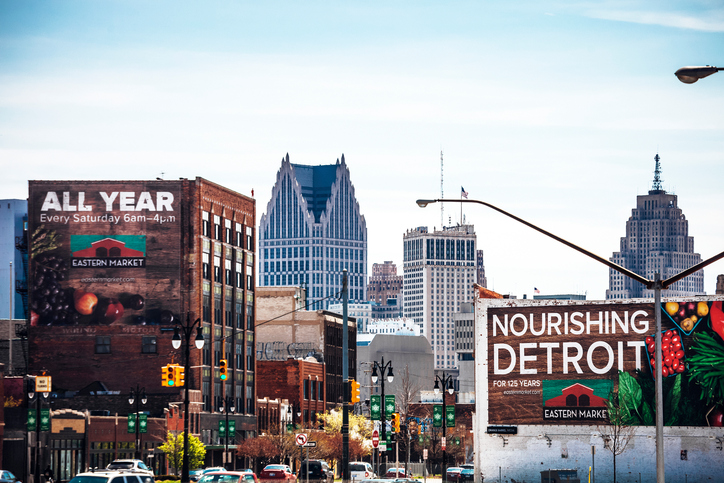 Chicago, New York, San Francisco, and New Orleans are some cities that have long been the bastion for exciting, delicious food, but now you can add Detroit to that list as well. Fueled by a chef-friendly culture that embraces collaboration, the food scene in the Motor City is finally gaining traction. Locals are not the only ones who have noticed (and tasted) the deliciousness that the city has to offer, however, as major publications throughout the country have begun to do so as well. Condé Nast wrote about it, Zagat named Detroit one of America’s “Next Hot Food Cities,” National Geographic mentioned the city as one of the “6 unexpected food cities in America,” Thrillist called Katoi one the best new restaurants in America in 2016, and the Washington Post also wrote about how Detroit is suddenly becoming a food mecca. Although a bulk of the restaurants are in located in close proximity to downtown Detroit, there are also a number of neighborhoods in Metro Detroit such as Royal Oak, Troy, Novi, Ferndale, Hamtramck, and Hazel Park that serve up some amazing, diverse fare.

It is exciting to see this city garner acclaim for something other than the auto industry. The way that local chefs treat each other as partners who work together to better the overall food scene, rather than competitors vying for a piece of the market has been the key in the city’s evolution. Hopefully, this attitude will continue, for the restaurants that have been popping over the past few years have been world class, and will invariably draw in foodies from around the country.

Here are some of our favorite spots in Detroit:

Here are some of our favorite spots in Metro Detroit: