It takes a real logistical genius to deliver presents to everyone in the world in one night. He goes by many names, St. Nicholas, Kris Kringle, but he is most commonly referred to as Santa Claus. How did a man born in Turkey hundreds of years ago become the owner of one of the largest logistics empires in history?

A brief history, good ol’ Santa Claus was born around 280 A.D. in modern day Turkey. Before he got into the toy making game, he traveled all over donating money to the sick and poor. “I knew I wanted to help people and find some way to make everyone happy. That’s how I started traveling and making toys for children” said Santa Claus. In the beginning Santa made all the toys and delivered them himself. As he started to deliver to more children Santa knew he had to bring on help.

After a few years of Santa running the business on his own, he then met an elf named Alabaster Snowball on his travels. This meeting would change Santa’s business forever. Alabaster had ideas to streamline the toy making process by hiring elves. “The elves’ union can be a little difficult to deal with, but we have a great work force.” As the business grew the challenge of creating a central headquarters had to be solved.

Since Santa had help from Reindeer, which is still the fastest form of air travel, he was able to expand the reach of his delivery. Santa and company were now able to make as well as deliver toys to the entire world in a single night. After a few centuries of manufacturing their own toys for delivery, Santa wanted to change things up. 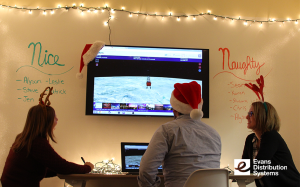 “In the late 20thcentury we began to notice that kids were more interested in brand name toys. We had the infrastructure in place to give everyone presents, but not the rights to the brands. That’s the reason we decided to change our business model” said Santa. The company shifted from being a manufacturer to a 3PL provider. This way Santa can still deliver toys to all the good girls and boys, while having access to the brands they want. With all these new partnerships Santa Claus had to expand his business even more.

After converting the business into a 3PL, the Christmas company needed more ways to transport products in and out of the North Pole. Reindeer International takes care of the air travel. The next expansion was an intricate rail system that was properly named the Polar Express. Since Santa has a patent on Reindeer that can fly using Christmas magic, the Polar express allows businesses to send their product to the North Pole.

When we asked Santa how he manages to deliver presents to the entire world in one night, he said. “With the population being over 7 billion people, delivering to everyone is difficult. We have overcome this problem by working with partners we like to call Santa’s helpers.” He goes on to say “One of the best helpers we have is Evans Distribution Systems. Their expertise in Warehousing, Transportation and Fulfillment make excellent helpers we can depend on. They have also been on the nice list going on 90 years.”

From all of us here at Evans Distribution Systems, we wish a safe and Happy Holidays.